Edwin giving the Speech at the Event

RE:      CEASE AND DESIST NOTICE IN RESPECT OF DEFAMATORY STATEMENTS UTTERED BY YOURSELF MR. WYCLIFFE M. SHAMIAH, FCPA, TO THE MEDIA, BEFORE THE NATIONAL ASSEMBLY COMMITTEE ON FINANCE AND NATIONAL PLANNING, AND PUBLISHED BY THE CAPITAL MARKETS AUTHORITY AGAINST CYTONN INVESTMENTS MANAGEMENT PLC ‘CYTONN’ ON THE AUTHORITY’S WEBSITE THROUGH VARIOUS PRESS RELEASES AS WILL BE REFERENCED HEREIN

Following your incessant attack on the Cytonn brand, you are putting into risk investments of over 30,000 Kenyans valued at over Kshs. 20 billion and we now seek to protect the interests of innocent Investors hence, we are considering proceedings against you in the following manner: –

Consequently, we have instructed the law firm of Apollo Mboya and Company to immediately institute proceedings to remove you from office on the following grounds:

It has been brought to our attention that you, without proof or reasonable presumption on which to base your statements, uttered, published or caused to be published under the Capital Markets Authority website various statements seeking to discredit the authenticity of the company and its operations; and which statements have caused concern from potential partners as well as our clients. You have done this through various forums:

We have reason to believe that the statements made by you Mr. Shamiah, in their plain and ordinary meaning and by necessary implication not only refer to Cytonn but also could be interpreted to mean that Cytonn is an opportunistic investment partner intent on unfairly taking advantage of its investors and the general public.

“The Authority confirms that Cytonn Investments is not a licensed and approved entity.” In promoting the confusion in the market, the authority did not distinguish between the regulated and/or unregulated products but rather made a blank statement implying that the larger Cytonn company or rather, Cytonn itself was acting without the law and in breach of the law. There is no requirement for Cytonn Investments’ private offers to be licensed by CMA and it is needless to say that this matter is before Court and we shall endeavour to get the Courts interpretation on the same.

In the video, you,  Mr. Shamiah is heard and seen stating the following “Given that Cytonn Investments Management was not our licensee in law what happens next is we go to police and report this is a criminal offence. Someone doing something that is more or less raising money from the public without an approval. We did communicate that to Cytonn very clearly. Around 2018 -2019 we did insist that they had to stop, because if it is like they were actually accessing money from the public this is not allowed. And the choice we gave them because we were looking at it as in if they are already clients how can they have an option”

By your statements you are seen, heard and understood to insist that Cytonn Investments is operating without the sanctioning of the law and approval of the Capital Markets Authority a statement that we categorically refute. To date all actions carried out by Cytonn are done after getting the requisite approvals from the Authority. The statement in its plain and ordinary meaning implies that Cytonn is hard-headed with no intention of working together with the regulator for the benefit of its investors which is not true as evidenced by all correspondence between the Authority and the company.

In pages 8 and 9 of the Report to the Committee on Finance and National Planning, you mention that you were unable to bring Cytonn’s unregulated products under regulation hence your forwarding the complaint to the Capital Markets Financial Investigations Unit (CMFIU). We find this allegation to be laced with malice as Cytonn High Yields Solutions (CHYS) having been in operation since 2014 is a fact that was well within your knowledge, the Authority’s and its agents. The Authority has on numerous occasions engaged Cytonn Investments Management (CIM) through various correspondences (see attachments) in an attempt to ensure that CHYS is operating in accordance with the provisions of the Capital Markets Act and The Capital Markets (Securities) (Public Offers, Listing and Disclosures) Regulations, 2002. Throughout the years, the company has faithfully complied with all the requirements that were put across by the Authority including the change of name from Cytonn Cash Management Solutions to CHYS, a name that you sanctioned and directed be advertised to the public.

As proof of sanction by law and the Authority, we wish to rely on the following correspondences:

Based on the foregoing, the statements by yourself that we are unapproved are false, and proof of unbecoming conduct by a regulator and to be specific its Chief Executive Officer, yourself, Mr. Shamiah. The ill-intentioned statements have caused confusion by portraying the company as an illegal operation and thus caused damage to the Cytonn brand which we have painstakingly built through the years. This has resulted in financial damage by causing loss of business to the firm, and we shall hold you personally accountable for the loss.

Your statements in their entirety are likely to be interpreted by the right-thinking members of the public and in specific potential investors to mean that Cytonn Investments is an illegal operation. This is a false statement and one without basis as by way of our attachments we can prove our adherence to the various requirements put across by the Capital Markets Authority and the law.

Purporting and insinuating that the company is operating without the sanctioning of the law is malicious, false and harms the firm’s brand. This has the effect of, and indeed it has caused damage to the business by discouraging potential investors and causing the existing ones to pull out their investments. The accusations by yourself simply put are outrageous and it is unseemly and unethical of you to make such scandalous claims without basis or proof.

These staged, well-timed and libelous acts are intentionally and maliciously designed to damage the reputation of Cytonn, a reputation which we have painstakingly built over time in the marketplace, and divert business away from Cytonn. Through uttering the defamatory statements and publishing the same or causing to be published on both print media and CMA’s website both of which have wide viewership and readership, poses a serious threat to Cytonn’s reputation placing in jeopardy the interests of our clients as well as stakeholders.

We also believe that your public stunts and incoherent utterances are knee jerk reactions for self-preservation and exonerating yourself, rather than providing leadership and direction to the market to protect investor interests.

In as much as the Constitution of Kenya guarantees you the freedom of speech, the freedom cannot be used in a manner likely to cause harm to another’s right. Your statements are neither a fair comment on your part nor part of your exercise of your right of speech and expression as envisaged in the Constitution. Your sentiments squarely fall within the threshold of defamation for being false, negligent and malicious.

In order to protect Cytonn’s interests we are considering proceedings against you in the High Court at Nairobi Civil and Tax Division. The proceedings would seek remedies including but not limited to the following:

We shall also be instituting through appropriate processes, your removal from office based on the following grounds

In responsibly defending Cytonn’s right and in protecting our interests, we will consider desisting from issuing legal proceedings against you provided that within Ten (10) days of the date of this letter you agree to do the following and where we therefore DEMAND THAT YOU:

We trust that you shall find our demands as justified in view of the repeated assaults made on Cytonn’s character by yourself, and take a practical view of the reputational damage and confusion you have caused in the minds of our clients and the public at large.

You are hereby advised.

« Ngatia Never Had The Character to be CJ; Let koome Be! 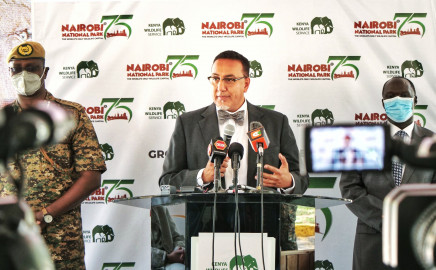